When we try to figure out the growth of a site, or the relative traffic between sites, we often turn to the only free public tools available for the job.

That would be Compete.com and Alexa.com. Both are known to be inaccurate, however, Alexa perhaps more notoriously so.

The reason for their inaccuracy is the method of their tracking. Alexa relies on traffic stats from their toolbar that users must install. So, it’s not a representative cross section of the internet. Compete incorporates data from ISPs, toolbar users, and opt-in panels. Despite their added efforts, I’ve found their numbers to also be way off.

Finally, there’s Quantcast — another traffic estimator service. I’ve personally found their estimates to be equally inaccurate. However, unique to their service is the ability for site owners to place actual Quantcast tracking tags on their site so their traffic is directly measured. Once they collect enough data, they will display (if you chose to opt in) the actual traffic stats for all to see.

What this means is we can actually compare actual traffic stats to Compete’s estimated traffic stats (which are also reported in uniques/month) to see what Compete’s margin of error can be across different sites.

Based on a small sample of websites (n=25), Compete’s estimates predict from 18.6% to 137% of a site’s actually measured traffic stats. 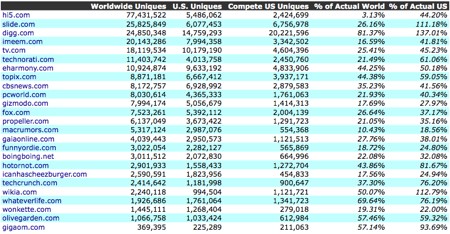 Compete U.S. Uniques
Compete’s estimate based on their aggregate data.

% of Actual world
How far off is Compete’s U.S. numbers compared to Actual Worldwide

% of Actual US
How far off is Compete’s U.S. numbers compared to Actual U.S.

Now, to be fair, Compete only claims to offer estimates of U.S. monthly uniques, but I’ve included Worldwide uniques to point out how deceptive this can be for sites with a large international audience, such as Hi5.com. Compete’s U.S. estimate only counts 3.13% of Hi5’s actual worldwide traffic. Even when comparing U.S. numbers, Compete still underestimates Hi5’s U.S. traffic by over 50%.

In our small sample size, the most underestimated traffic sites where

These sites’ estimates were not that far off, and in some cases overestimated actual numbers.

I’m not sure if many conclusions can be drawn from this data alone, but it just shows that traffic stats estimates can be very deceptive. I was somewhat surprised that some sites’ estimates were actually greater than their actual stats.

This entry was posted in Business. Bookmark the permalink.

8 Responses to Compete.com’s Margin of Error